How a Capital Lease Works

A capital lease is the other type of lease, and unlike an operating lease, a capital lease requires the lessee to bear some of the risks and benefits of owning the asset, even though it never actually owns the asset. A capital lease occurs when the lessee records the asset on the balance sheet as if it owns the asset. The lessee would then make lease payments to the lessor, and these payments consist of interest and principal repayments, just like a loan.There are several pro’s to capital leases. Just like if the business actually owned the asset, they can choose to deduct the interest component of the lease payment each year for taxes, and can also claim depreciation each year on the asset. That is to say, as the asset decreases in value each year, the business can benefit from this, whereas this would not be possible with an operating lease.

To account for a capital lease, familiarize yourself with the terms of the arrangement and make the appropriate journal entries. Keep in mind that new rules issued by the Financial Accounting Standards Board (FASB) went into effect in 2018 for public companies and in 2019 for all other organizations. Even though a capital lease is a rental agreement, GAAP views it as a purchase of assets if certain criteria are met. Unlike operating leases that do not affect a company’s balance sheet, capital leases can have an impact on companies’ financial statements, influencing interest expense, depreciation expense, assets, and liabilities. The Financial Accounting Standards Board (FASB) issued new accounting rules in 2016 for leases – both capital and operating.

What is the difference between a capital lease and an operating lease?

Capital Lease vs Operating Lease. A capital lease (or finance lease) is treated like an asset on a company’s balance sheet, while an operating lease is an expense that remains off the balance sheet. Capital leases are counted as debt. They depreciate over time and incur interest expense.

Under the lessee accounting model in previous GAAP, the critical determination was whether a lease was a capital lease or an operating lease because lease assets and lease liabilities were recognized only for capital leases. Topic 842 provides detailed guidance and several examples to illustrate the application of the definition of a lease to assist entities in making this critical determination. Fixed-term (and usually non-cancelable) lease that is similar to a loan agreement for purchase of a capital asset on installments. The lessor’s services are limited to financing the asset, the lessee pays all other costs including insurance, maintenance, and taxes. Capital leases are regarded as essentially-equivalent to a sale by the lessor, and a purchase by the lessee (even though the title remains with the lessor).

At the end of the lease term, the lessee has the option to buy the leased asset. Before you determine the accounting entry of a capital lease agreement, you need to ensure that the lease is actually a capital lease and not an operating lease. In contrast, a capital lease involves the transfer of ownership rights of the asset to the lessee. The lease is considered a loan (debt financing), and interest payments are expensed on the income statement.

What is lease capital?

A capital lease is a lease in which the lessor only finances the leased asset, and all other rights of ownership transfer to the lessee. This results in the recordation of the asset as the lessee’s property in its general ledger, as a fixed asset. Ownership.

The present market value of the asset is included in the balance sheet under the assets side and depreciation is charged on the income statement. On the other side, the loan amount, which is the net present value of all future payments, is included under liabilities. A capital lease is a contract entitling a renter to the temporary use of an asset, and such a lease has the economic characteristics of asset ownership for accounting purposes.

The capital lease requires a renter to book assets and liabilities associated with the lease if the rental contract meets specific requirements. In essence, a capital lease is considered a purchase of an asset, while an operating lease is handled as a true lease under generally accepted accounting principles (GAAP). A lease is a contractual agreement conveying the right to use property, plant or equipment for a specified period of time.

Capital leases are classified under the “fixed assets” or “plant, property and equipment” heading in the assets section of a small or large company’s balance sheet. If “substantially all the risks and rewards” of ownership are transferred to the lessee then it is a finance lease.

A lease agreement refers to the act of one company lending an asset to another company, in exchange for periodic rent payments (like renting an apartment, for example). Capital leases are one form of lease, where the lease is basically structured as a purchase and financing agreement. Capital leases are commonly employed when businesses loan large pieces of equipment or other capital-intensive assets to each other.

What are the advantages and disadvantages of capitalizing interest for tax purposes?

Under GAAP, lessees are required to book a right-of-use asset and related lease liability for all leases, operating or finance (under ASC 840) that are not considered short-term leases. For tax purposes, an operating lease will be treated as a true lease, with the lessor maintaining ownership of the asset and depreciation deductions, while the lessee has deductions related to rental payments. A finance lease (capital lease under ASC 840) gives the tax benefits, such as depreciation deductions and deductions for interest payments, to the lessee. For reporting purposes, there is usually no separate “capital lease” line item under fixed assets because leases are recorded in one of the regular fixed-asset items, such as buildings and computer equipment. The amount should be equal to the cost of the asset minus the accumulated depreciation, which is the allocation of the costs of a fixed asset over its useful life.

Leases are contractual agreements between lessees and lessors in which lessees get the right to use leased assets for a specified period in exchange for regular payments. Capital leases resemble asset purchases because there is an implied transfer of the benefits and risks of ownership from lessor to lessee, and the lessee is responsible for repairs and maintenance.

With a capital lease, payments are considered both a liability and an asset on the firm’s balance sheet because the business assumes some of the risk of ownership. The firm can deduct capital lease interest expenses on each year’s tax return. To calculate the interest rate on a capital lease, the firm must know several elements, including the total amount financed, the monthly lease payment amount and the term of the lease.

Therefore, leased assets must be capitalized and shown in the lessee’s balance sheet as a fixed asset with a corresponding non-current liability (lease payable). The lessee acquires all the economic benefits (such as depreciation) and risks (such as the possibility of the loss of the leased asset) of ownership but can claim only the interest-portion (not the entire amount) of the lease payment as an expense. A lease must meet one of four criteria to determine if it is a capital or operating lease. If none of the conditions are met, the firm has an operating lease and must treat expenses related to the lease as an operating expense on the income statement. The lease on a long-term asset is considered a capital lease or operational lease for accounting purposes.

Advantages of an Operating Lease 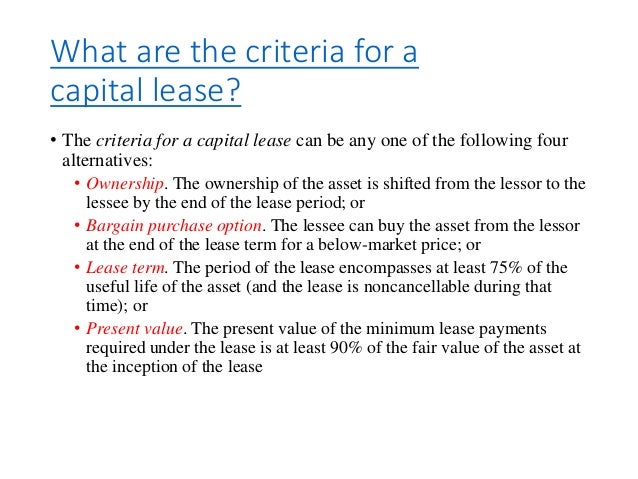